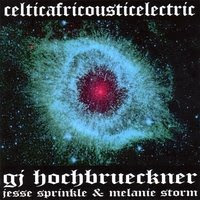 This independent project by Western New York guitarist and engineer George Hochbrueckner is an eclectic mix of styles and nuances. Hence, the title suggests a potpourri of hooks, riffs, and shades of color that seem to emphasize his personality.

One of the founding guitarists of the regional ‘90’s Rochester, NY band, Burning Icons, and co-owner of Bluebrick Recordings, along with Jesse Sprinkle (of poor old lu, Demon Hunter, and Dead Poetic fame), George H. dabbles in Beach Boys themes, surf, blues, R&B, college rock, and even laid back coffeehouse vibes. For lyrics and vocalizations, he lent space to Melanie Storm, a voice that melts between sultry and breathy wonderment.

Strong instrumental tracks include “The Grace McBride Jig”, “Treehouse”, and “Morocco Maia Baby”. Strong vocal tracks include “Melancholy”, “This Is How It Goes”, “Tummy Tums” and “The Walls Are Growing Ears”. George even adds his own tongue-in-cheekiness to “Oscar The Hippopotomus II”, an absolute stitch to hear. For an indy project, this goes well with a long cigar.